Today was an exciting first day at Intel ISEF! We flew into Pittsburgh and took a bus to the Renaissance, seeing much of the city. It was especially special to see Intel ISEF posters hanging up on the lampposts around the city. After checking into the hotel, which is beautiful, we walked down to the convention center to get checked in and attend the pin exchange mixer. The exchange was so much fun! They had music playing and lots of food which represented some different cultures. It was such a great experience meeting kids from all over the US and all over the world. We got to know some of their projects and traded pins and other items like magnets, leis, and chopsticks. Everybody was so friendly! Some of the countries included Malaysia, Jordan, Indonesia, Ireland, England, Japan, Korea, Tunisia, and many more. The states ranged from Hawaii to Colorado to Louisiana to New York and many more. Once the pin exchange ended at 9 we went back to the hotel for a good nights sleep before setting up our posters, touring the city, and attending the opening ceremonies tomorrow. 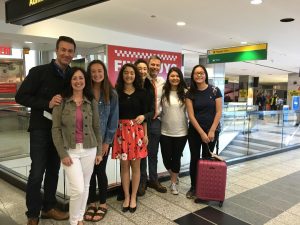 The next science fair is on:

Look for more information about the 2023 Science Fair!

There were nearly 8.6 million STEM jobs in May 2015, representing 6.2 percent of U.S. employment.
BLS.gov

We welcome support from businesses, organizations, and individuals who recognize the value of inspiring and educating today's students in STEM.